This is Readings and Ramblings. It is readings because this is a site for blogging about books and I intend to do that. It is ramblings because I might want to write about something else now and then. 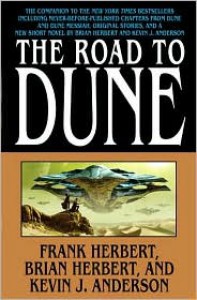 As an author creates a work of fiction it is normal to do a lot of revising. Entire sections and chapters may be removed or added. It is also not uncommon for others to get into the creative act and that was the case with Dune. Frank Herbert's agent, editor and publisher made demands about revisions. They demanded that chapters be removed and the ending changed and so forth. After Herbert's death a lot of this excised material along with many notes were found in his papers. It was enough to show that Dune could have been a lot different. This book is a compilation of some of that material. Some of it has been rewritten and filled out by Brian Herbert and Kevin J. Anderson and some of it is as Frank Herbert left it. Now, the decisions about what was to be removed was based on the opinions of not only Frank Herbert, but also his editor, agent and publisher. I am not one who thinks that all opinions are equal. If, for example, my doctor recommended surgery I would not seek a second opinion from my plumber. There is much to be said for the professional opinion, but how much is it worth when it is about a work of fiction? Well, it certainly determines what gets into print, but are there things that do not get into print but should? It seems to me that the opinion that really counts when it comes to a work of fiction is the opinion of the ultimate consumer, the reader, and that these professional opinions are valuable only insofar as they predict the opinions of the end consumer. Bearing that in mind, as an end consumer myself, my opinion is that a lot of these out takes are better than the final product.

By the way, the book also contains some original Dune universe short stories by Brian Herbert and Kevin J. Anderson which are also far from shoddy.
Tweet